May Day - The Celebration of Spring

The days are getting longer, the flowers are blooming, and spring is in full swing. People have been celebrating the coming of spring for thousands of years and for many years, Coquitlam was no exception. The City of Coquitlam Archives has a significant collection of photographs and records related to the celebration of May Day here in Coquitlam. This exhibit explores the history of May Day and its observance in Coquitlam and presents some of the wonderful records we hold in the Archives. 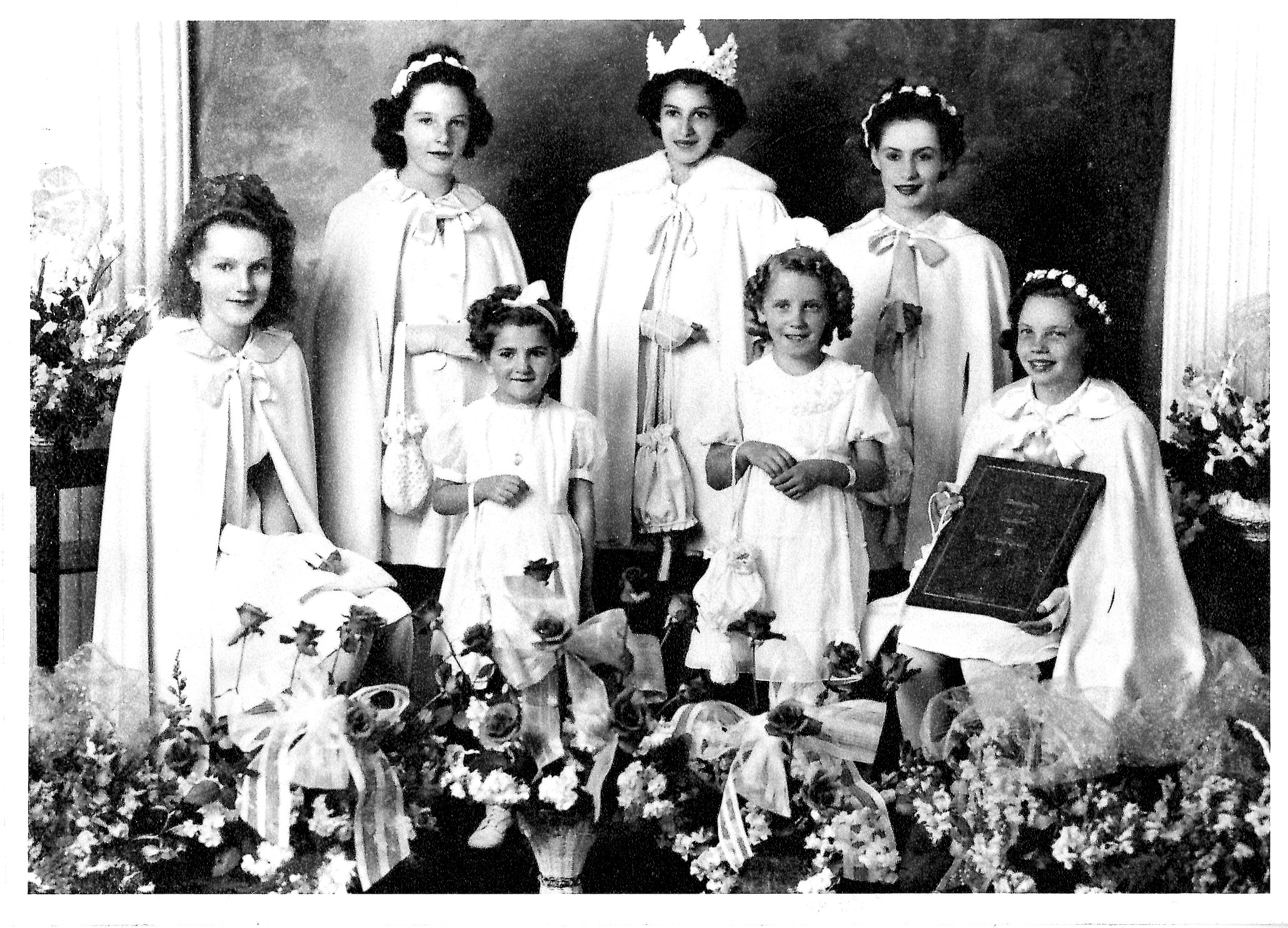 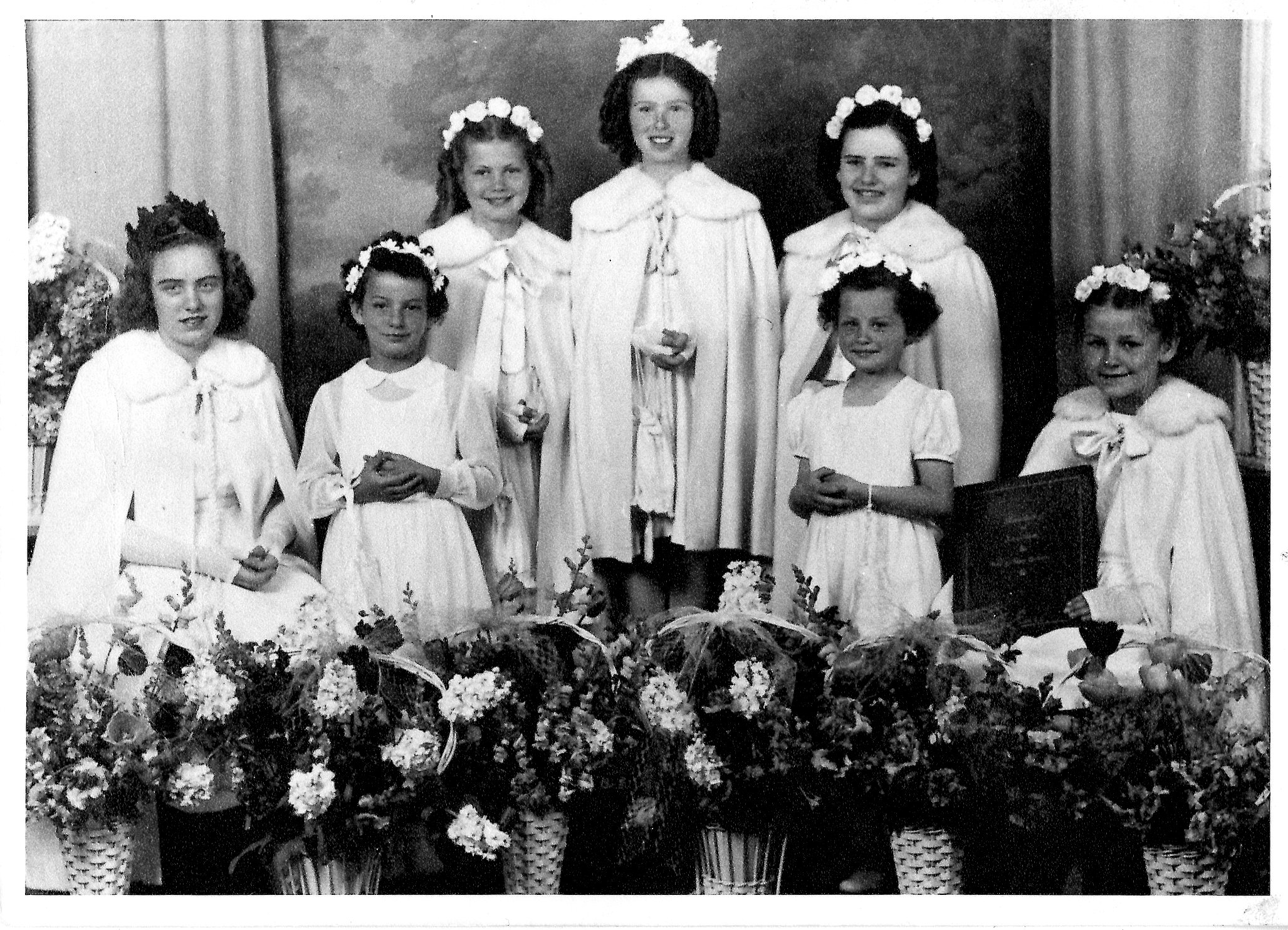 The Origins of May Day

The roots of modern May Day celebrations can be traced all the way back to the Roman Floralia, a festival held in springtime in honour of the Goddess Flora. It is said to be linked to Beltane, the Gaelic spring festival celebrated on the first day of May and was also celebrated as a holiday in many pagan traditions. Many of the tenets of Canada’s modern May Day, like dancing around the Maypole, or crowning the May Queen, can be traced to traditional English May Day celebrations that marked the end of the planting season.

May Day celebrations in the Lower Mainland began in New Westminster in 1870 and then in Port Coquitlam in 1923. The tradition continues in both New West and PoCo to this day. It might surprise you to learn that Coquitlam once had its very own May Day, celebrated officially from 1940 to 1962, and once more in 1971 for British Columbia’s centennial.

E.M. (Manny) Gueho is remembered as the instigator of May Day in Coquitlam. He saw the festivities happening in New Westminster and Port Coquitlam and felt that Coquitlam should have its very own May Day celebrations. A committee was formed in early 1940 to plan what was to become an annual affair.

On April 8, 1940, Mrs. Crawley (Secretary for the May Day Committee) approached Council to suggest that May 31 be declared a public holiday. The Committee was asked to check with the local merchants to see if they would find the proposal acceptable.

The first May Day celebrations took place at Blue Mountain Park on May 31, 1940 but it wasn’t until 1948 that the day was declared an official half-day holiday.

Council Minutes, May 10, 1948
(City of Coquitlam Council and Office of the City Clerk Fonds) 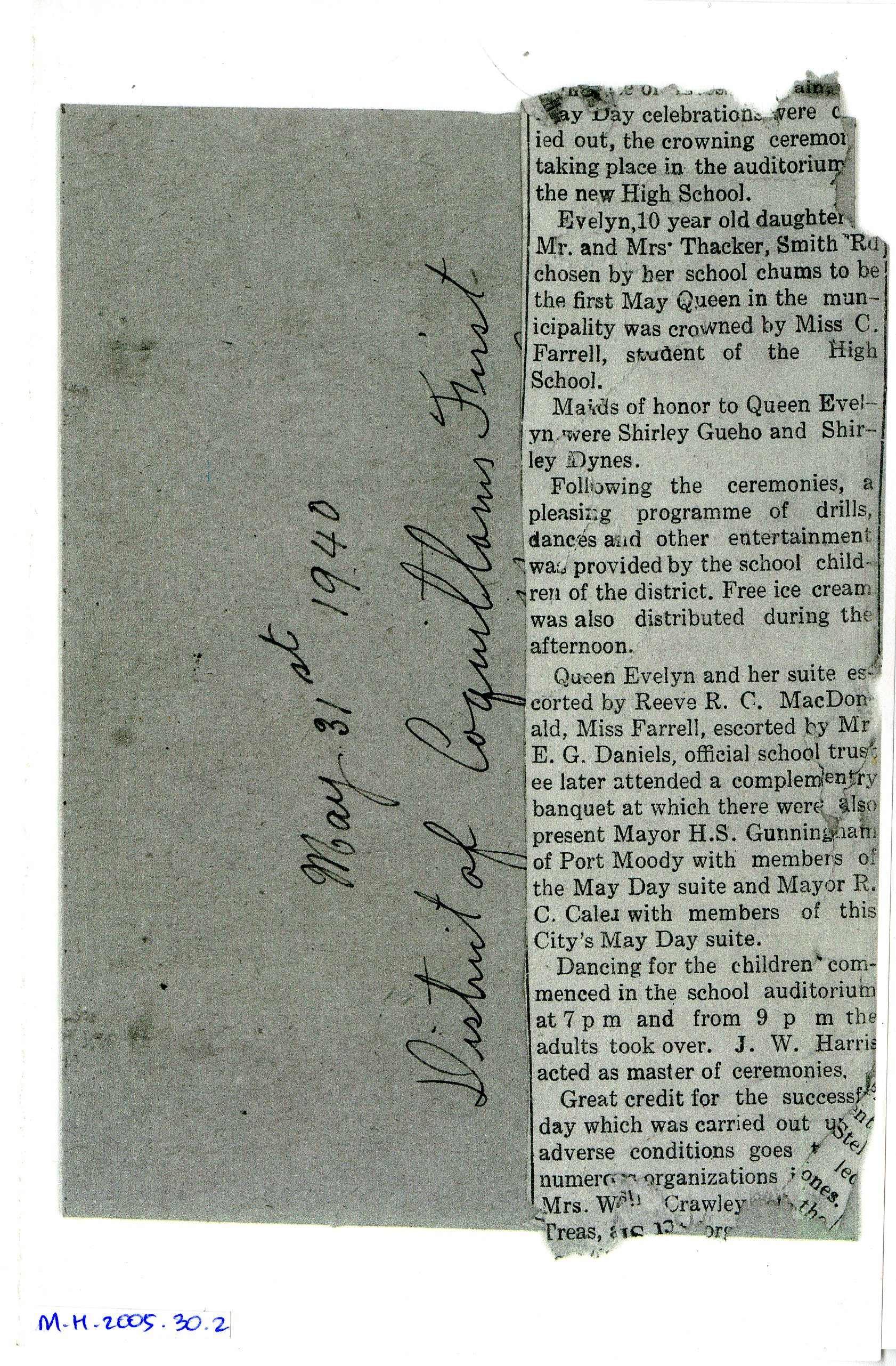 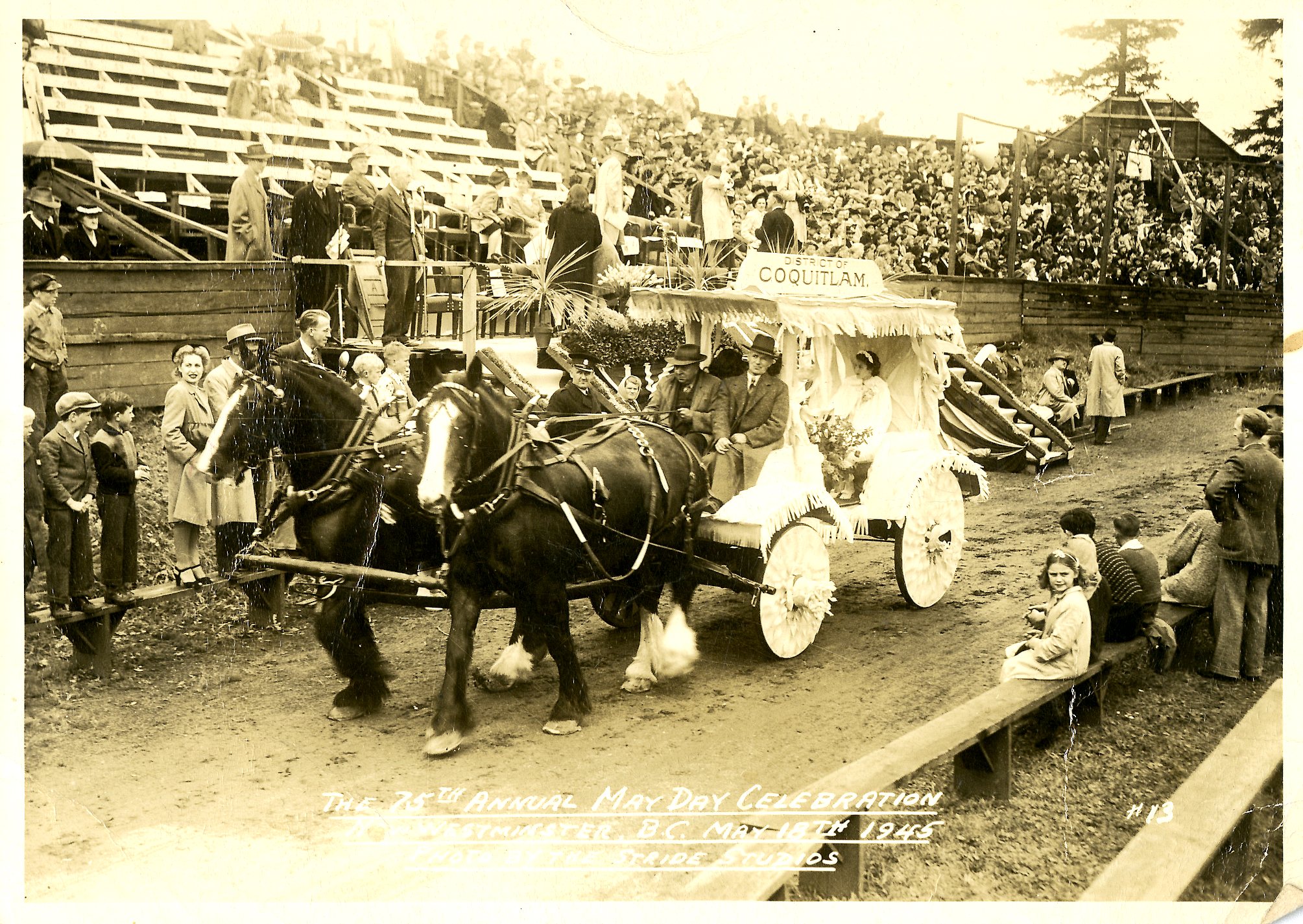 Coquitlam continued its annual May Day celebrations until 1963. At this time, Coquitlam was experiencing rapid growth and the elementary schools were challenged by the influx of new students. The decision was made that the teachers could no longer spend the time to rehearse the Maypole dancing with their students. At the same time, funding became an issue and as a result the official celebrations were cancelled.

In order to keep the May Day traditions alive, the responsibility was passed to the Recreation Commission. Former Recreation Director Don Cunnings was tasked with recruiting volunteers to teach the Maypole dancing. In order to accomplish his task, he sought assistance from Sir Richard McBride Elementary School in New Westminster to learn the dance himself so that he could teach volunteers. Equipped with new skills, a committed group of mothers at various elementary schools across the city continued the tradition of teaching the young students how to perform the Maypole dance.

A joint Coquitlam May Day and Centennial Sub-Committee was struck in 1966 but there is no record of any official May Day celebrations occurring until 1971 when the festivities were resurrected in celebration of the British Columbia centennial. This was to be May Day’s final year in Coquitlam.

Council Minutes, May 7, 1963
(City of Coquitlam Council and Office of the City Clerk Fonds) 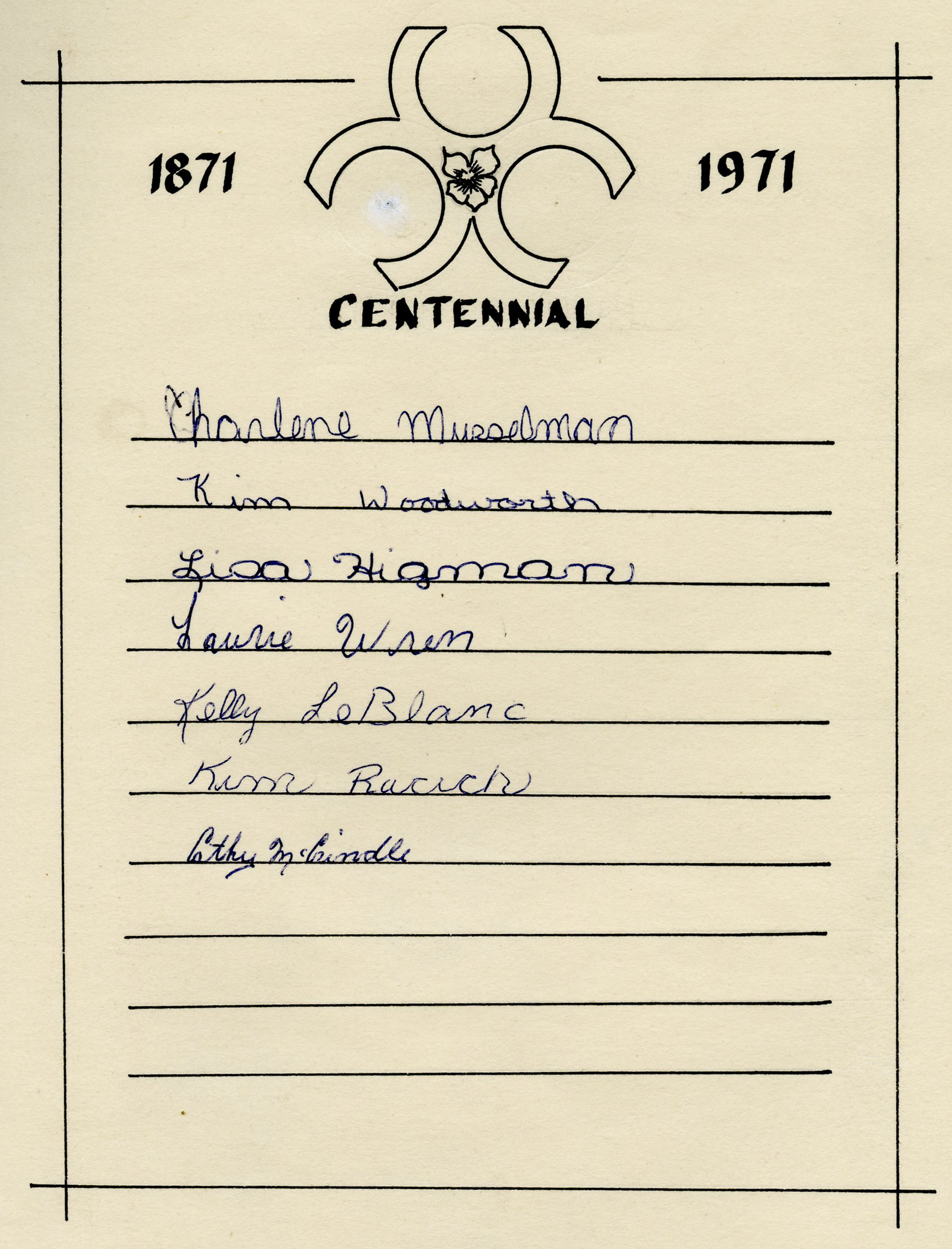 Coquitlam 100 Years: Reflections of the Past

(My husband) earned the unofficial title of Mr. May Day as the instigator of Coquitlam’s first May Day in 1940, and was chosen Citizen of the Year in 1961. He started May Day in Coquitlam, the very first one was held in 1940 at Blue Mountain Park, and headed the May Day committee for 23 years. New Westminster always had one, so he figured Coquitlam should have one as well. May Day was similar to the ones in New West, with the Maypole dances and the May Day ball at the school auditorium. 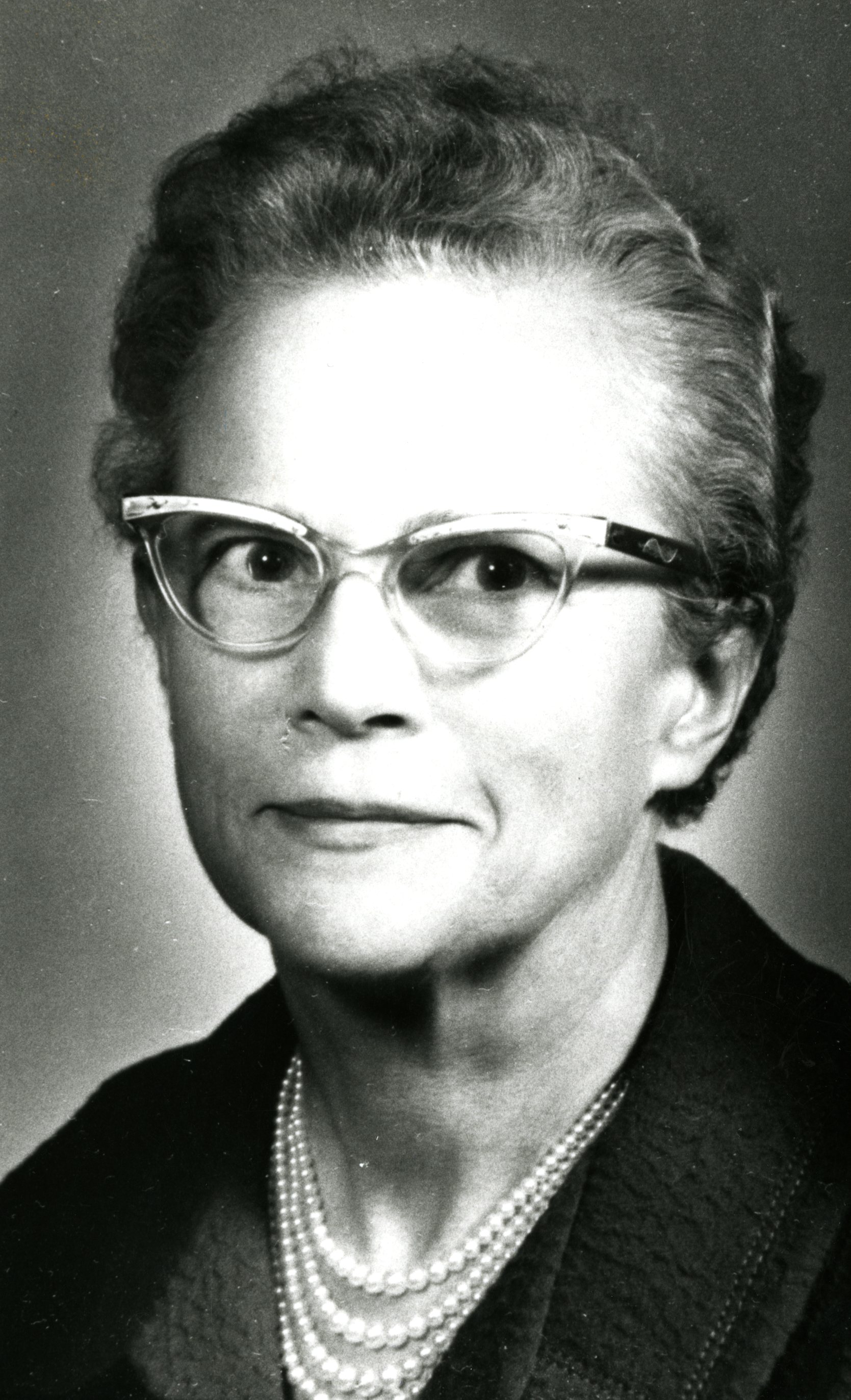 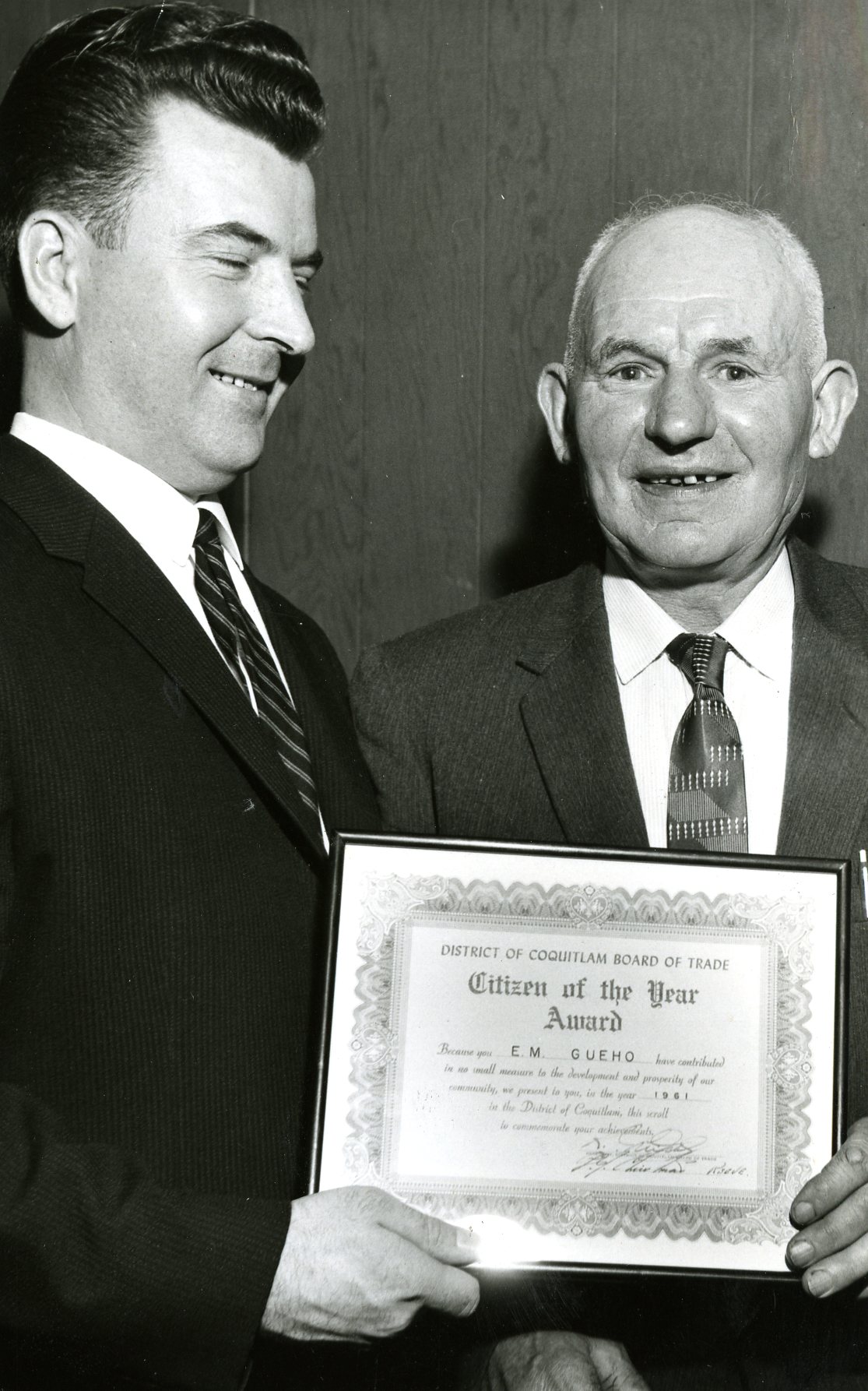 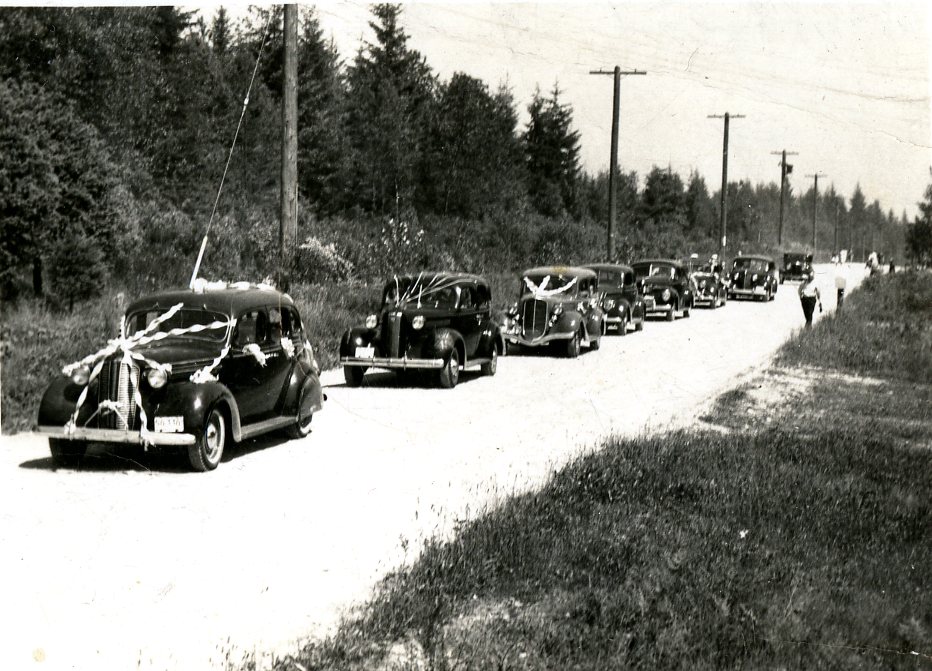 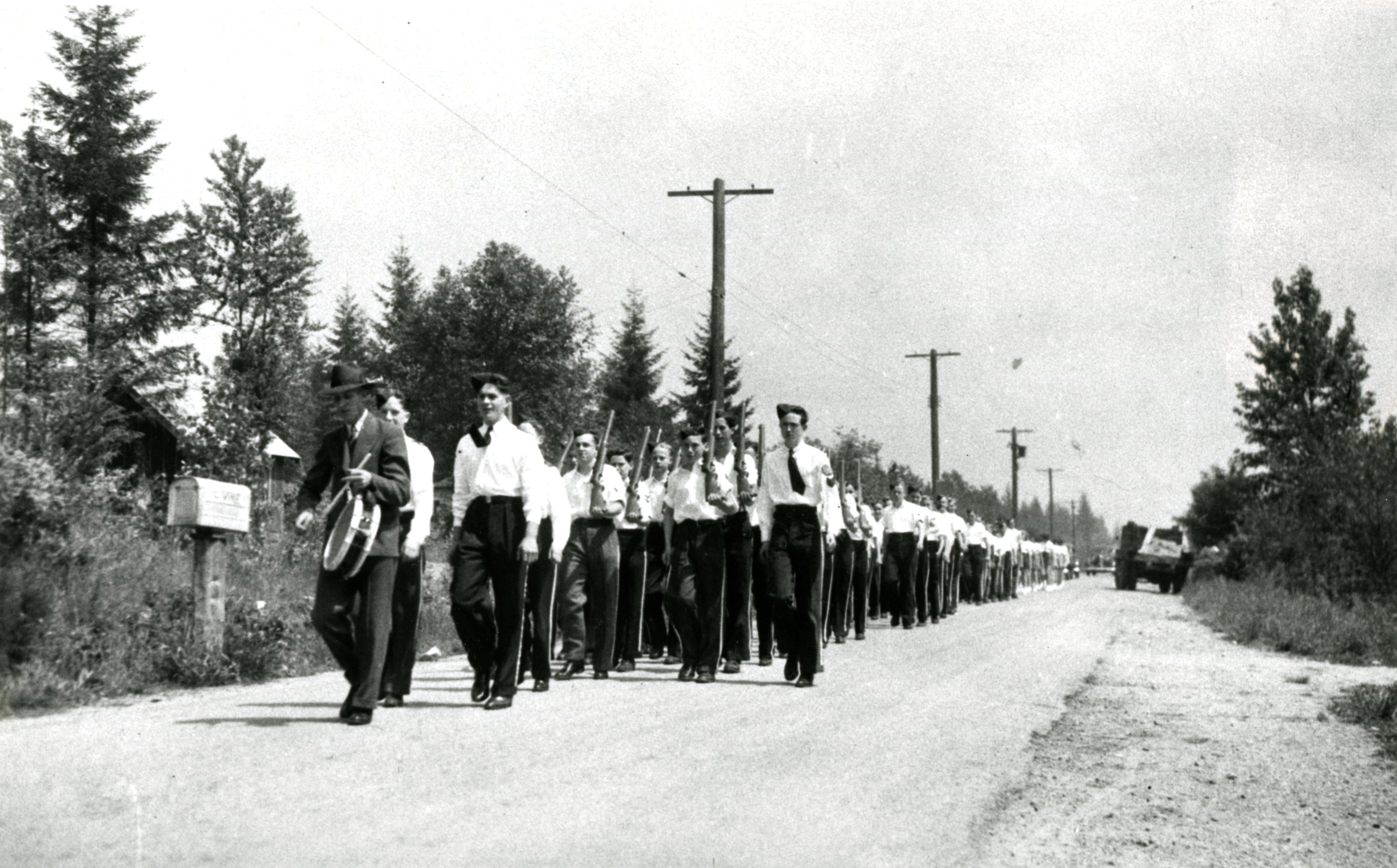 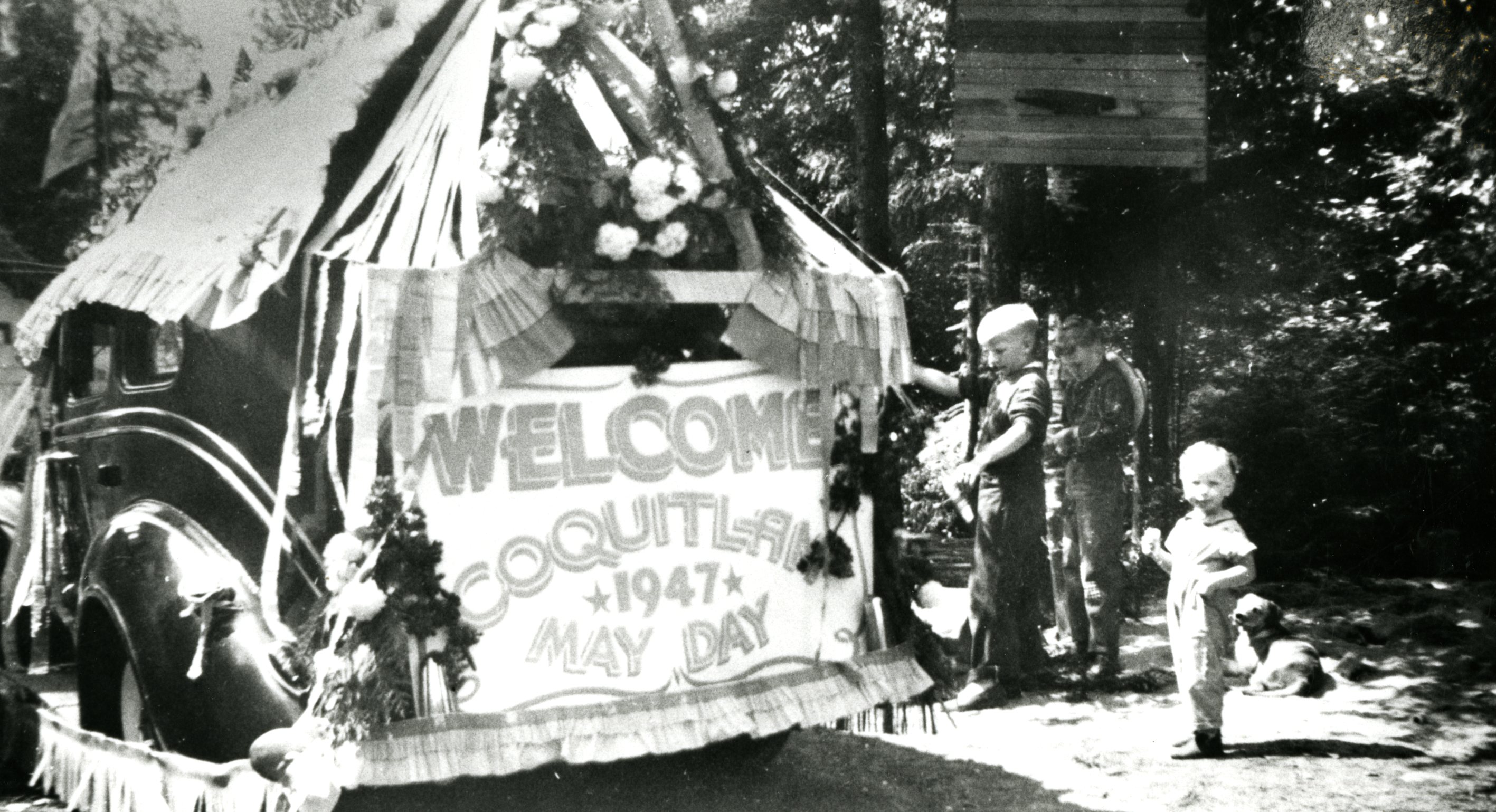 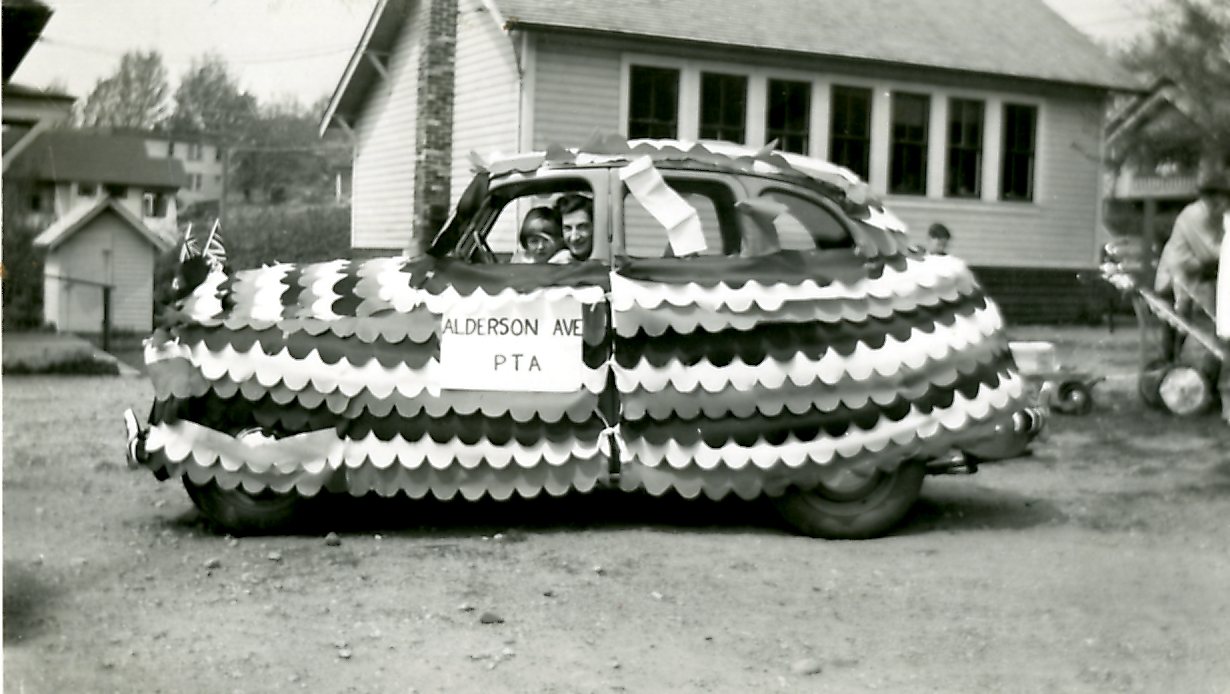 May Day was a big event in the spring time - it really was great. In 1948, daughter Alice, was chosen May Day queen. I think it was the first year the May Queen got picked by popularity, rather than out of a hat. I remember there were 106 girls running. There would be dinner and dancing on May Day, with all the schools involved. It was always a really nice day.

May Day was held at Coquitlam School on Austin Road and at Blue Mountain Park. The boys dressed in bow ties and the girls wore dresses. One lady always took care of the wardrobe, buying the capes for all the girls on the parade float.

I bought my daughter her dress and shoes; she also wore a crown and was given a gold locket to keep. A man named Manny (Manny Gueho) played a big part in May Day. Boy Scouts were also involved. My son helped lead the marching one year. The Maypoles were always so beautiful. They had pink and white streamers as a rule and they hung down from a decoration on top of the pole. Each school had its own Maypole. The dancers would intertwine the streamers, then go back again to open them. Oh it was always such a nice day! 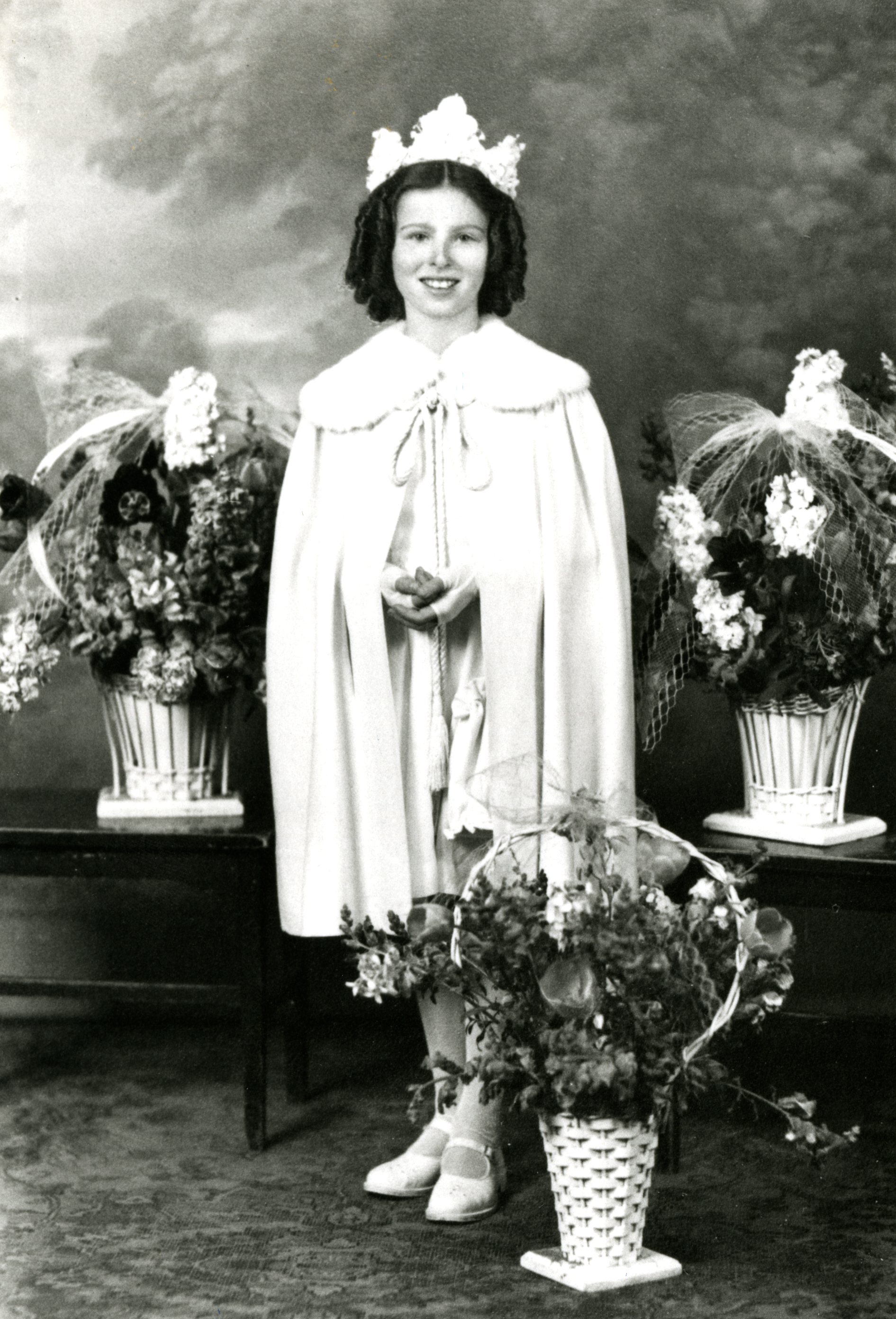 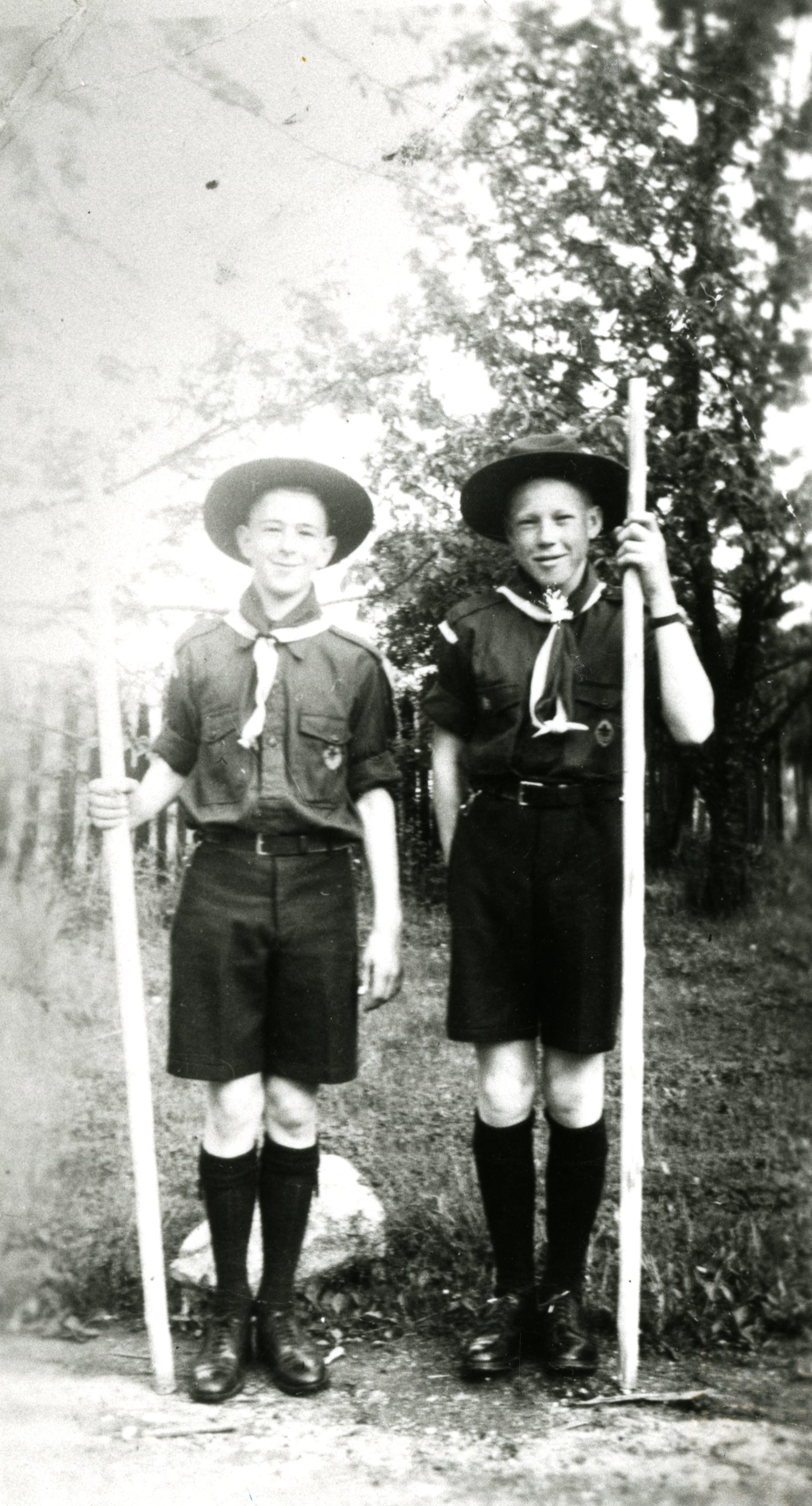 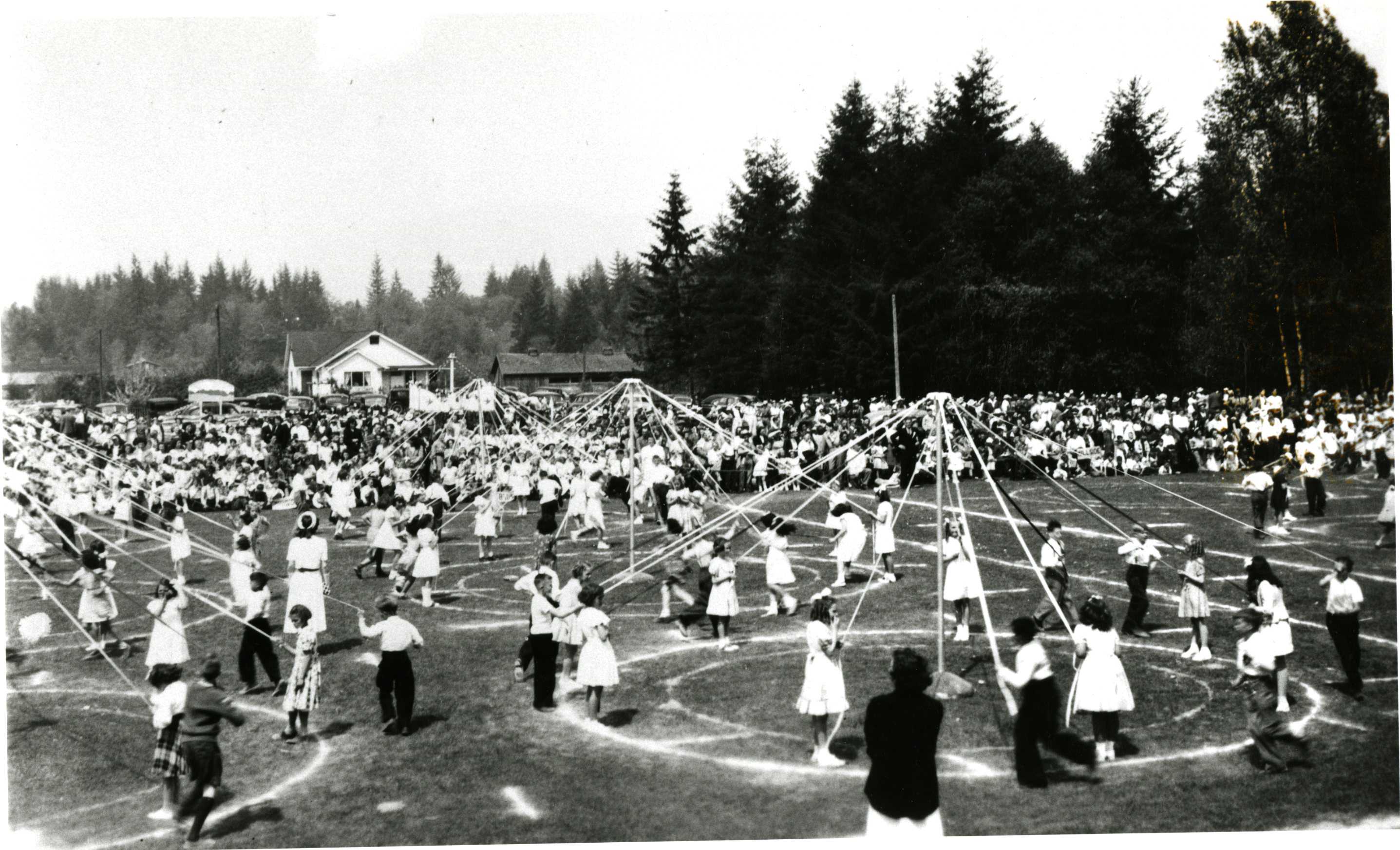 I was the maid of honor. The May Queen was Gilberte Gamache from Our Lady of Fatima parochial school. The other girl here is Euphemia Thompson from Central elementary school in Coquitlam. Each of the elementary schools in the district picked one girl - the kids voted. Then the May Day committee put all the names of the schools in a hat and drew the winner. My school, Mountain View, got picked second. The Catholic school got picked first and my school was second, so I became maid of honor. I was 11 years old. You had to be in Grade 4 or 5, something like that, to be picked. Our May Day was always in Blue Mountain Park, you know, May-pole dance and all that. I was one of the dancers; our teacher taught us all the routines. I was in the second May Day in Coquitlam so the first must have been 1940. The very first May queen in Coquitlam was from Mountain View, our school, Evelyn Thacker. We considered ourselves very lucky. 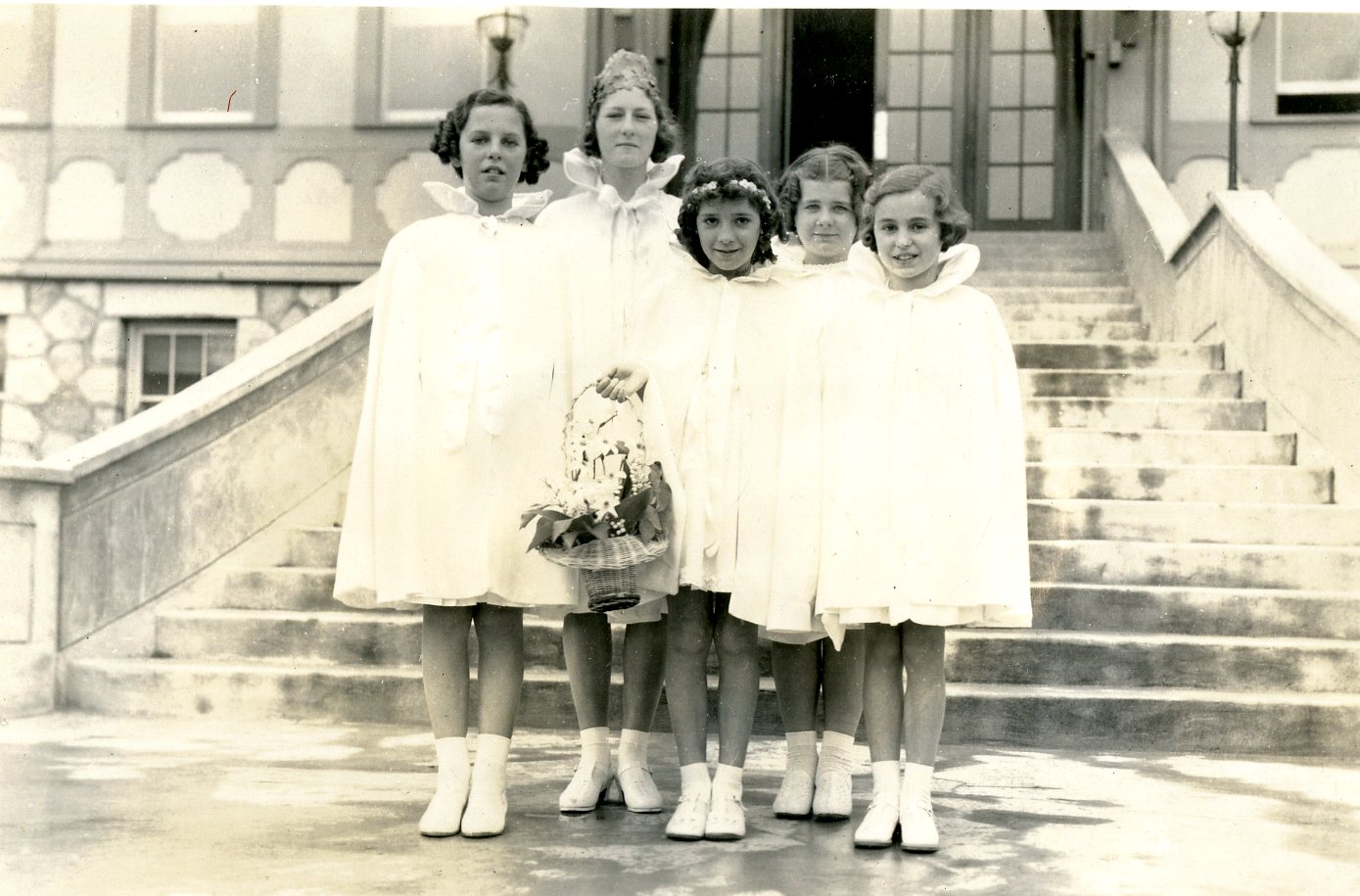 May Queen Evelyn Thacker and Her Attendants Outside the Municipal Hall During Coquitlam’s First May Day in 1940
(C4-MH.2005.30.1) 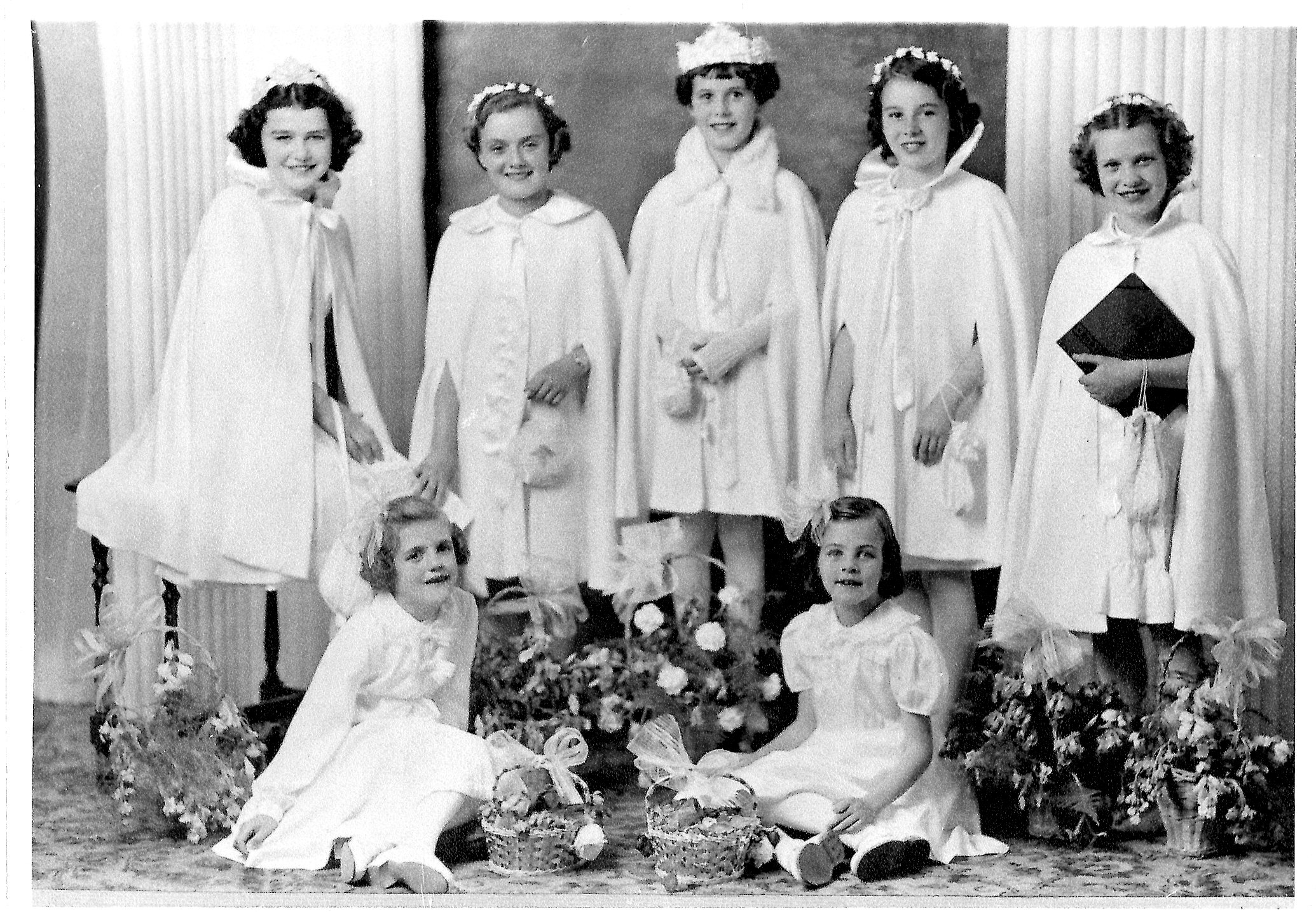 May Queen Gilberte Gamache and Her Attendants, Including Joyce Brown, 1941
(May Queen collection, C2.978.5.2b) 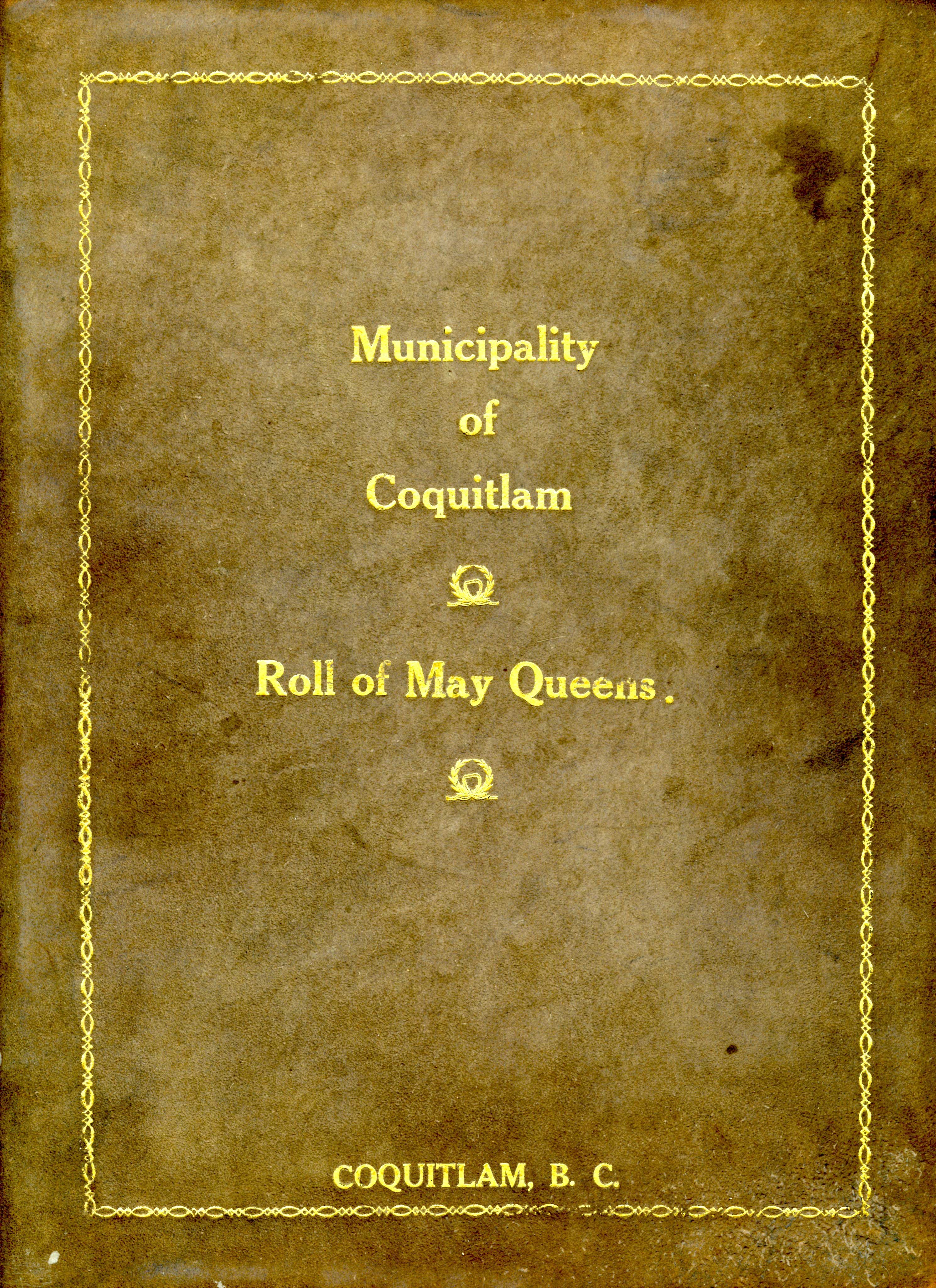 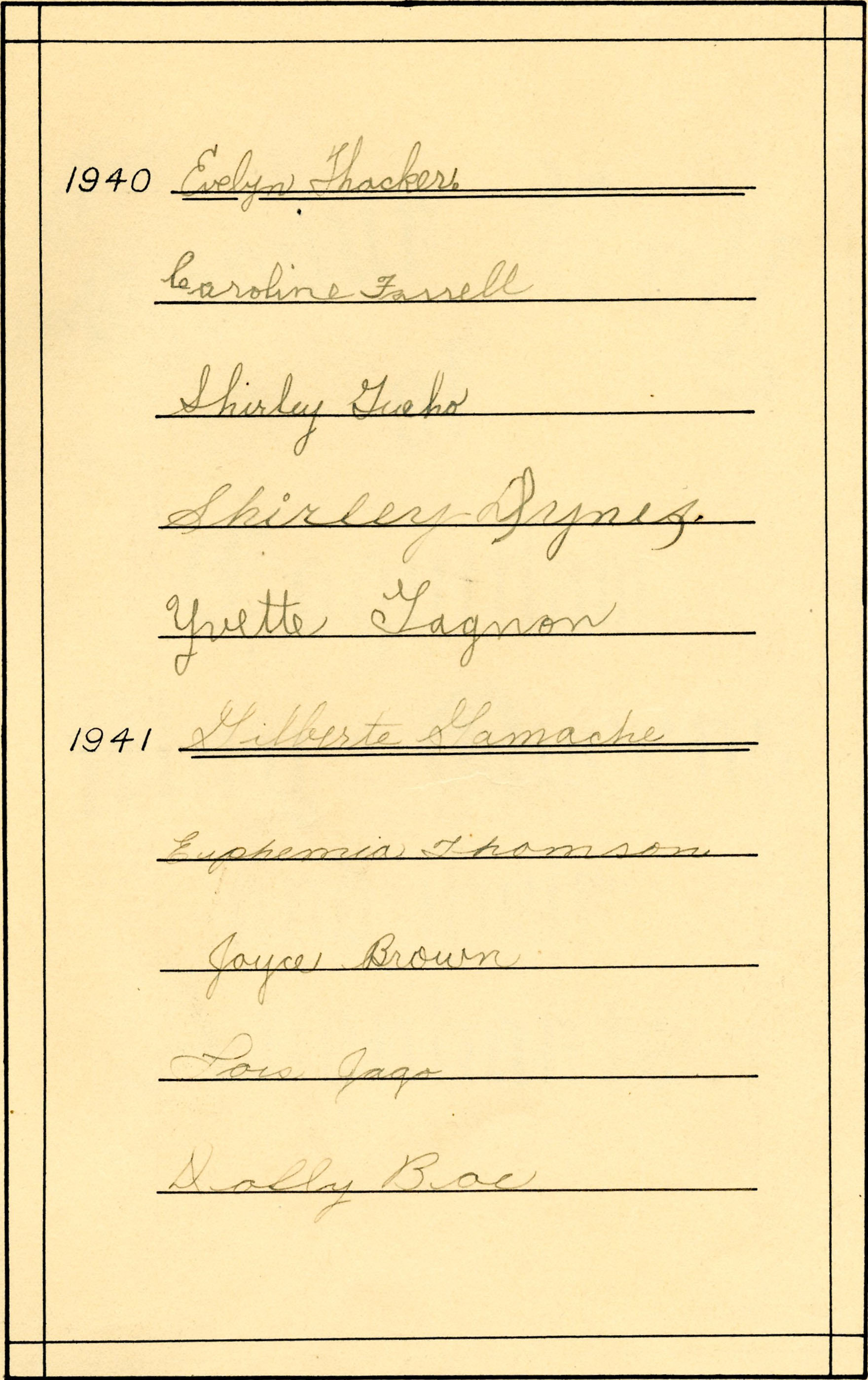 May Day lasted only one day, but it was loads of fun! 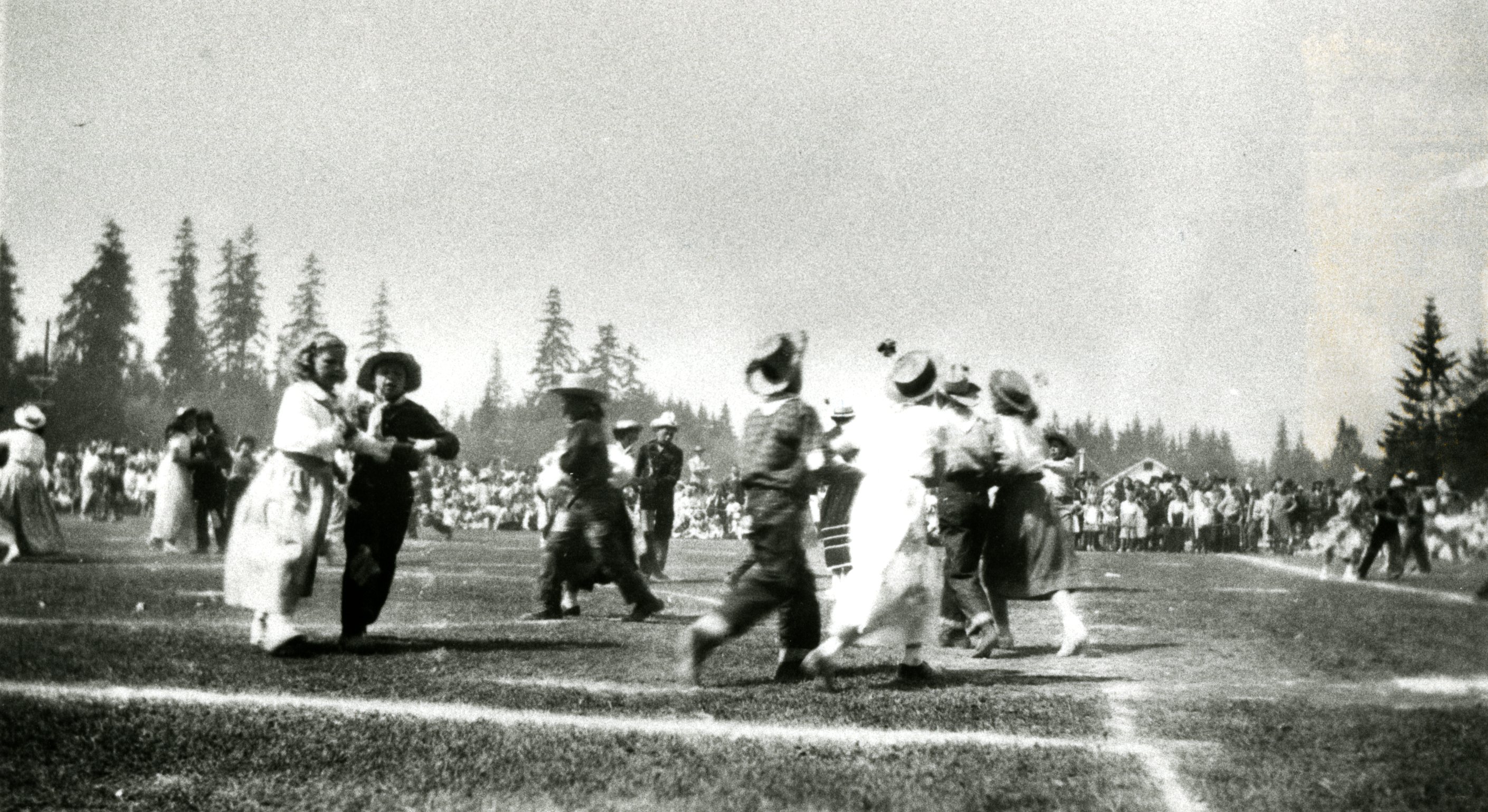 Children Dancing at the May Day Celebrations at Blue Mountain Park, 1940s
(C6.857) 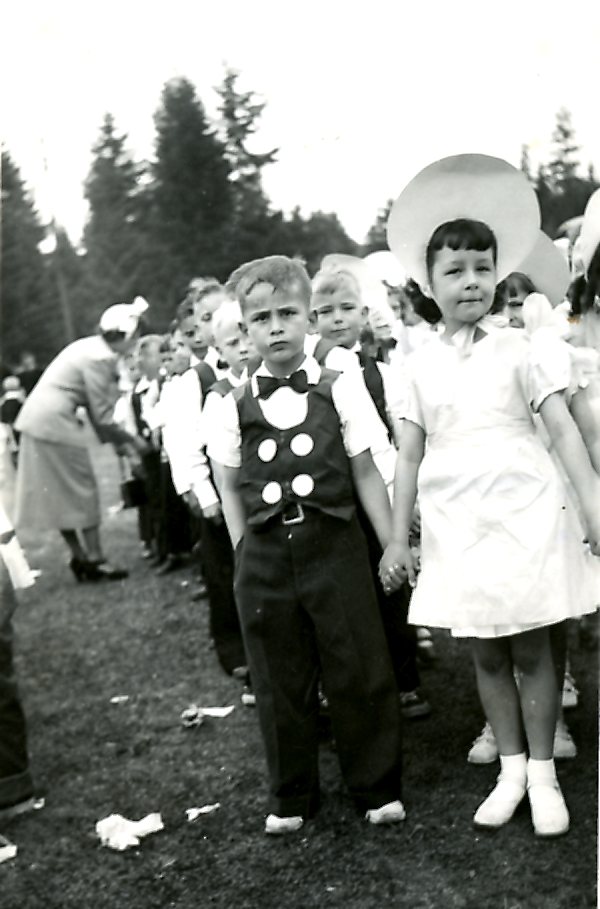 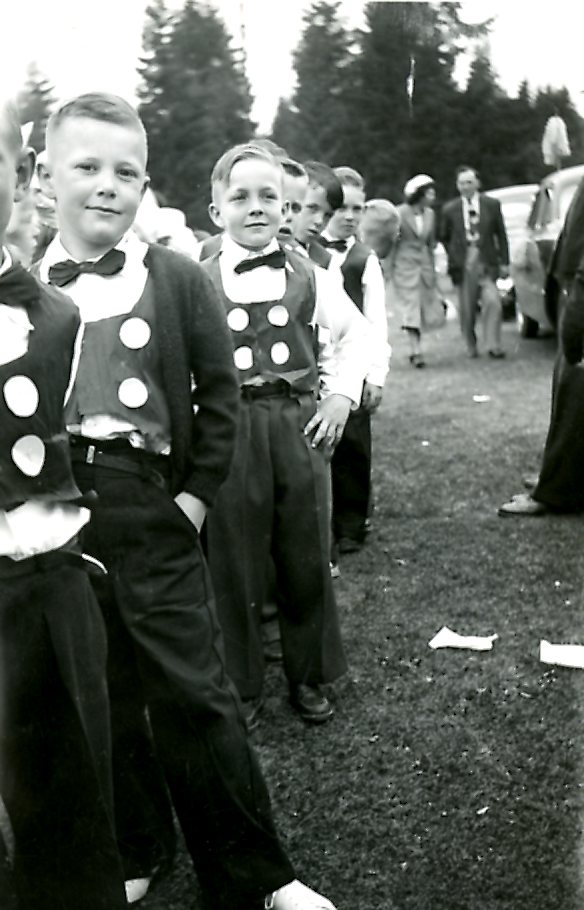