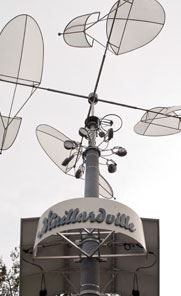 Opened on October 23, 2010, "Pioneer Spirit" is a gift from the City of Coquitlam commemorating the 1909 to 2009 Centenaire de Maillardville/Maillardville Centennial. The piece embodies the spirit of the pioneers who arrived in the area at the turn of the century, and provides a way-finding presence in the heart of Maillardville.

The kinetic work includes four sails and three solar panels, powering Led lighting and three listening stations. The listening stations allow you to experience a variety of sounds: natural sounds from the immediate area collected by parabolic microphone, archived recordings of the pioneers of Maillardville, and a choral piece called "Ils Rêvent d’un Village" "The Dream of a Village". This piece was commissioned by the Societe du francophone Maillardville through the 2009 Cultural Capitals of Canada program, and is performed by "Les Échos du Pacifique".

About the Artist, Douglas Taylor

Douglas Taylor is a local British Columbia artist. He was born in Chilliwack in 1947, and graduated from the Emily Carr College of Art and Design in 1981. After graduation he founded Third Dimension Studios Inc. in Vancouver, and since 1986 has created a multitude of public art pieces throughout North America. Douglas is the recipient of numerous awards, including two from the Canada Council for the Arts.