Return of the Sockeye 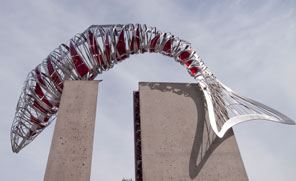 "Return of the Sockeye" anchors Coquitlam Spirit Square and tells the story of the small red salmon that were genetically unique to and prevalent in the Coquitlam River at the turn of the 20th century.

"Coquitlam," taken from the native word "Kwi kwe t lem", means "red fish up the river." The Kwi kwe t lem First Nation’s history describes sockeye salmon so abundant in the Coquitlam River at spawning time, you could walk across the river on their red coloured backs. In the early 1900s, the British Columbia government built a dam at the headwaters of the Coquitlam River to create a reservoir of drinking water for the growing City of New Westminster. The dam resulted in the disappearance of the sockeye. Nearly 100 years later, the Kwi kwe t l em people have succeeded in reestablishing a small sockeye run in the Coquitlam River.

"Return of the Sockeye" features a large red sockeye salmon arching its body over a concrete wall that represents a dam. The "dam" includes an interactive water feature. Water flows below the salmon, over the side of the ’dam’, and down luminous red glass "salmon eggs." The water continues to trickle along a flowing arrangement of river stones and large rocks that weaves across Spirit Square, with more red glass salmon "eggs" nestled randomly among them. A long red bench flanks the "river," and provides tranquil seating. The bench lights up in the evenings, representing the backs of the schools of sockeye returning to their home to complete the cycle of life.