About Our Local Government

Local government is the most accessible and responsive level of government, made up of local citizens elected by the community, which together form the City Council. Coquitlam City Council leads an organization that:

How Your City Works

The City provides a range of services including water and sewer, garbage and recycling collection and road maintenance, but it is also involved in strategic planning, growth management, recreation programs and facilities, and financial planning. How does the City manage to do all of this? A Mayor and Council, elected every four years, are responsible for setting the City’s policies in accordance with the terms outlined in the Local Government Act.

City of Coquitlam Coat of Arms 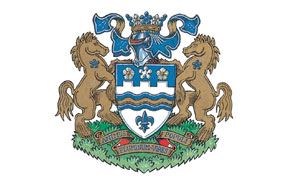 The City of Coquitlam motto is:
"ANIMUS FLUMINUS VIRES POPULI"
The Spirit of the Rivers (is) the Strength of the People
On October 30, 1990, the coat of arms with this inscription was received officially at a ceremony held in the Council Chambers of Coquitlam’s old Municipal Hall.

The symbolism in the armorial bearings (the area between the two Clydesdale Stallions) signifies:

The design of the coat of arms was done with the assistance of Mr. Graham Anderson, a Cowichan, British Columbia resident who is knowledgeable in heraldry. The artist who interpreted the heraldry design was Mr. Alistair Priestly of Port Moody, British Columbia.

The City Flag is a representation of the City crest in a rectangular flag format.